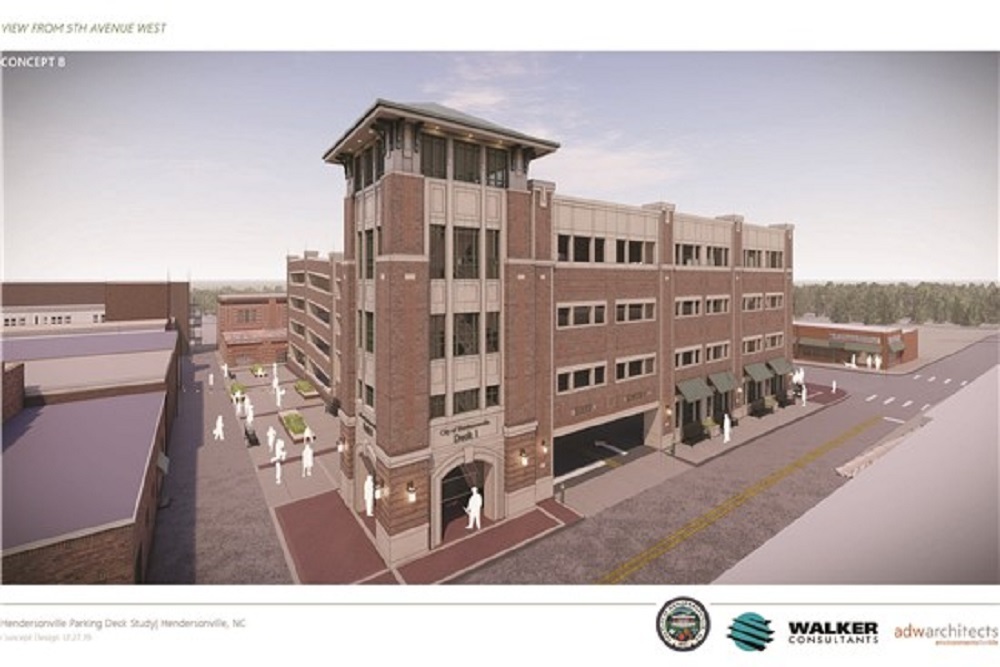 City of Hendersonville  issued the following announcement on Jan. 15.

On January 14, City Council Members received an update on a possible downtown parking deck planned for the corner of Church Street and Fifth Avenue. The five-story public parking deck would facilitate parking for a proposed hotel to be located at the Dogwood parking lot site as well as increase the amount of downtown visitor parking by several hundred spaces.

Throughout the day, representatives from Walker Consultants, a parking consulting firm, and ADW Architects presented options to elected officials and local media that would meet the increased parking demands spurred by a downtown hotel. The consultants provided design concepts, preliminary financial analysis, and made recommendations on implementing a system that would incorporate existing parking lots, on street parking, and the proposed deck into a cohesive and economically viable structure.

In terms of the look and design of the deck, presenters shared the goal of blending the parking garage into the downtown fabric of Hendersonville. Features like canopies, planters, and lighting fixtures, have been incorporated into concept designs to make the structure visually appealing.

During the presentation, two concepts with similar layouts were unveiled. The renderings show designs with brick exteriors intended to complement existing downtown architecture. Each design contained two towers at opposite ends of the structure containing the stairwells and elevator. The renderings differed slightly in aesthetic detail including articulation on the window areas and the appearance of the roof of the tower. Both tower options, 64 and 60-feet tall respectively, are below the existing downtown building height limit. Both designs showed the decks containing 323 spaces with entrances and exits on the Fifth Avenue and Church Street sides.

In order to introduce a parking deck into Hendersonville, consultants recommended looking at downtown as an entire parking system. The preliminary financial analysis shows a plan that would adjust on-street parking within the Main Street District to a rate of $1.50 an hour. Parking in the garage would be free for the first hour, followed by a $1.25 hourly rate with a $10 maximum for daily parkers. Portions of the garage would be reserved for monthly parkers, hotel parking, and rooftop parking offered at a discounted rate to serve downtown employees and residents. The economic model presented aims to move people into the deck, free up street parking, and provide revenue to offset the cost of building the deck. The preliminary findings showed construction, design, and soft costs totaling $8.2 million. The City would also need to purchase equipment and on-street parking kiosks.

City Manager John Connet explained Council Members would come together to discuss the parking garage proposal at their February meeting, but any final decisions would not occur until the hotel project was further along. The parking deck concepts are also being presented to downtown stakeholder groups and committees for their feedback.

Want to get notified whenever we write about ?

Sign-up Next time we write about , we'll email you a link to the story. You may edit your settings or unsubscribe at any time.